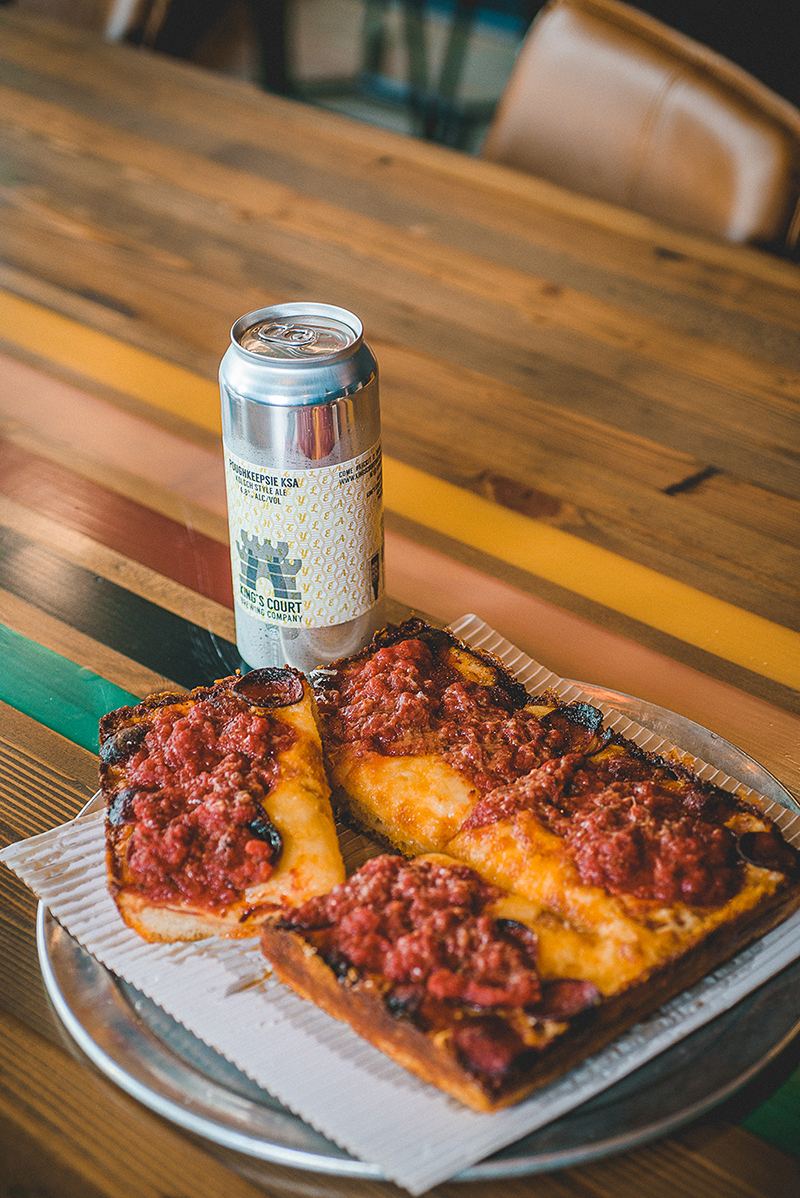 The pizza was developed in 1946 at Buddy's Rendezvous, a former blind pig owned by Gus and Anna Guerra located at the corner of Six Mile Road and Conant Street in Detroit. Sources disagree whether the original Sicilian-style recipe was based on Anna Guerra's mother's recipe for sfincione or a recipe from one of the restaurant's employees, Connie Piccinato. The recipe created a "focaccia-like crust" with pepperoni pressed into the dough to "maximize the flavor penetration". The restaurant baked it in blue steel pans available from local automotive suppliers, made in the 1930s and 1940s by Dover Parkersburg and used as drip trays or to hold small parts or scrap metal in automobile factories because baking pans available at the time were not appropriate for the dish. Some 50- to 75-year-old pans are still in use.
‍
The restaurant later was renamed Buddy's Pizza. In 1953, the Guerra’s sold it and opened the Cloverleaf in Eastpointe, Michigan. Former Buddy's employee Louis Tourtois founded Loui's Pizza in Hazel Park, Michigan. National chain Jet's, local chain Shield's, and Luigi's the Original of Harrison Township are other locally notable restaurants serving the style.

Buddy's Pizza chief brand officer Wesley Pikula, who started at Buddy's as a busboy in the 1980s, said that he had never heard the term "Detroit-style" before the 1980s when a trade magazine used it and that even afterward it was seldom used except in national trade articles. As late as 2007, some local media were referring to the style as "Sicilian-style". Some makers of Detroit-style pizza in other areas questioned whether to call their pizza by that name, as "sometimes people have negative thoughts about Detroit.

In 2012, local restaurant cook Shawn Randazzo won the Las Vegas International Pizza Expo world championship with a Detroit-style pizza, and according to pizza educator Tony Gemignani, the reaction was immediate. "After he won, I must have had six phone calls from operators, from guys who are big in the industry, saying, 'Give me a recipe for Detroit. How do I figure this out?'” Randazzo started a training and certification program to teach others in the industry to make "authentic Detroit-style" pizza. By 2018, he had trained 36 restaurateurs from the US, Thailand, and South Korea. By 2019 a restaurant in Canberra, Australia was serving the style. By 2019, the San Francisco Bay Area also experienced interest and growth. Montreal, Canada has a restaurant that began serving the style in 2020, describing that Detroit-style pizza is “everything we love about pizza, a long dough fermentation mixed with a combination of soft, chewy, and crunchy textures." According to Serious Eats, "in early 2016 or so, everyone seemed to be talking about it or writing about it or opening up restaurants devoted to it." Trade journal Pizza Today wrote in 2018 that "Perhaps no pizza style has entered the public consciousness in quite the way that Detroit-style pan pizza has." They credited Randazzo's International Pizza Expo win with "rocking the pizza world".