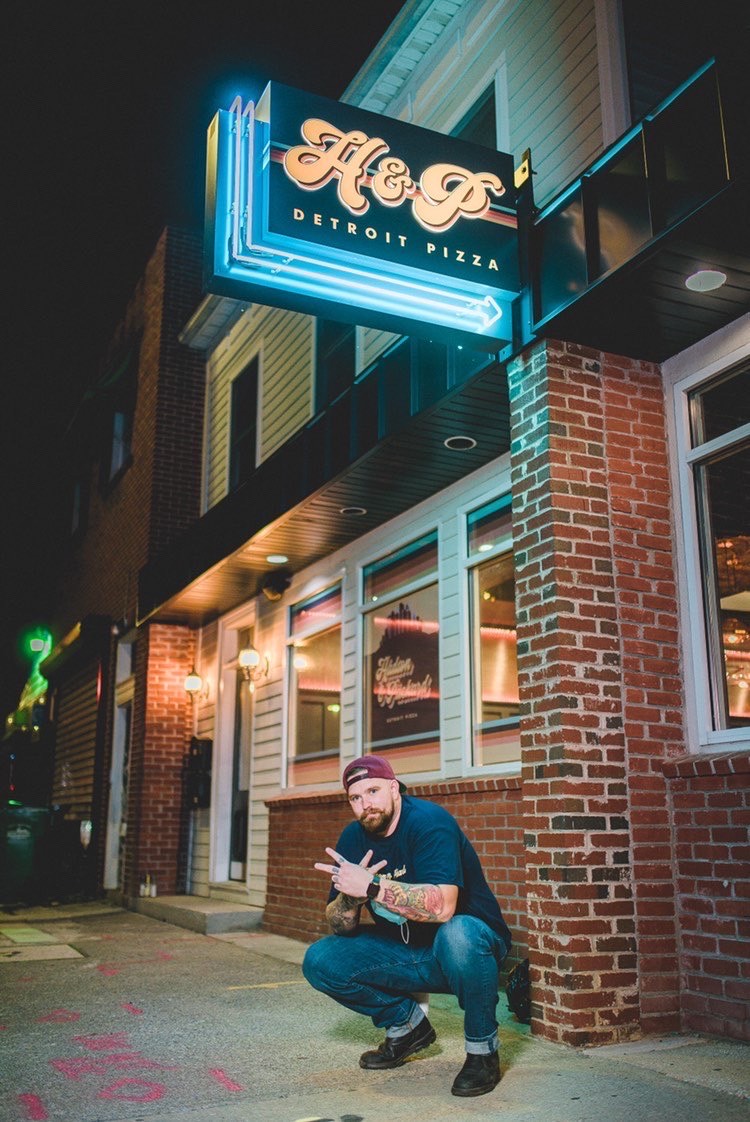 Every dream starts with a spark, and for the dream that became Hudson & Packard that spark was Chef & Owner Charlie Webb’s love for Detroit pizza. Born and raised just outside the Motor City in Dearborn, Michigan, this was the style of pizza Charlie grew up on and would later come to associate with home.
‍
After high school, Charlie joined the U.S. Army, and traveled the world. As any service member, past or present, can attest, the simplest reminders of home provide the greatest amounts of comfort. Unfortunately, his constant search for a square slice that would fit the bill always left him wanting more. So in 2014, he decided to take matters into his own hands and with the help of his friend Joe he started making pizza in his Syracuse, New York, home.
‍
That hobby quickly developed into more. Charlie started making pizza for family, friends, and anyone else willing to try it. The enthusiastic feedback from everyone who sampled a slice coupled with the unadulterated joy he felt while making it soon had him thinking of a career change. So, after eight years of honorable service, he traded his combat boots in for a chef’s apron and enrolled at the Culinary Institute of America in Hyde Park, New York.
‍
He knew when enrolling that his ultimate goal was to open a Detroit Pizzeria, but what he hadn’t counted on was succumbing to the charms of the Hudson Valley. He grew to love the area so much, that when he graduated at the top of his class in 2019, he knew he had already found the city where he’d open his first pizzeria.
‍
In September of 2019, Charlie and Joe founded Hudson & Packard and began offering their pie once a week out of Poughkeepsie’s local community kitchen, The Underwear Factory. The name Hudson & Packard comes from two popular car companies of the early 1900’s, and since Detroit is the “Motor City,” and Detroit pizza was first baked inside small auto parts pans, the name stuck! Dubbed “Motown Mondays”, their pizzas quickly garnered a cult following, with people beginning to line up each Monday ahead of their opening for a taste of that crust you can trust. Thanks to word of mouth from their early loyal customers, their weekly offering quickly become another Motown hit.
‍
Shortly after the pop-up started, Joe decided it was better for his family for him to stay in Michigan and the founding duo became a solo act. Determined to make his dream a reality, Charlie drove on, working the pop-up every Monday, and keeping the menu fresh with a new offering every month.
‍
In early 2020, operations at The Underwear Factory’s community kitchen, along with many other small businesses, came to a screeching halt amidst the COVID-19 pandemic. With the pop-up unable to continue, Charlie seized on the opportunity to capitalize on his newfound down time to work with investor Amanda Baxter to make a permanent location a reality. After finding the perfect Academy Street location, and months of hard work preparing the restaurant, they opened to the public on October 1st, 2020 and look forward to sharing Hudson & Packard’s Detroit pizza to the Hudson Valley for many years to come.